Create an Account - Increase your productivity, customize your experience, and engage in information you care about.

Sag Harbor, a Village of 2 square miles, is rich with history. The earliest inhabitants of this area were the Algonquin Indians. They called this place Weg-wag-onuch which was derived from the Algonquin word “Weg-quae-and-auke” meaning “the land or place at the end of the hill.” Sag Harbor, at that time, was made up of hills, streams, meadows and swamps. The neighboring villages called this area Great Meadows.

Sagaponack, south of Sag Harbor, benefited greatly from the convenient location of the “Great Meadows,” with the harbor providing an excellent port from which they could ship their goods. They called the place Sagaponack Harbor or the Harbor of Sagg.

Although records indicate that there was no permanent settlement until the late 1730, Southampton Town records first mention Sag Harbor by name in 1709. East Hampton records, although not calling the place Sag Harbor, recorded that Joseph Stretton was left, by his father, “a share of the piece of meadow that lies nearest Hog Neck (North Haven) in this town’s bounds.” This was in 1698.

The first subdivisions of land took place in 1738 and then again in 1745. From this point on, Sag Harbor grew.

In January of 1846, at two different meetings, the Trustees discussed the incorporation of the Port of Sag Harbor. On

From 1760 to 1850, the Village was a thriving whaling port. As a seaport, Sag Harbor had come into her own, and was second only to New York City in importance. It was the first Port of Entry in the State of New York being established one day before the city of New York by an act of Congress passed July 31, 1789 at the second session of the First Congress of the United Sates. When President Washington approved the creation of Sag Harbor as a Port of Entry, the Village had more tons of square-rigged vessels engaged in commerce than New York City.

The Village of Sag Harbor lays claim to a few other “firsts.” We became the first Village east of Brooklyn to have gaslights in December of 1859. The Village also has the great distinction of having the first Fire Department in the State of New York having been established by Chapter 58 of the Laws of New York of 1803.

With the discovery of gold in California, petroleum in Pennsylvania and a general scarcity of the whale, the whaling industry began to decline around 1850. Although whaling continued for about another twenty years, it was never as prosperous as it was between 1820 and 1850. The villagers, having to devise other means of making a living, turned to industry. Some of the earlier ones were a brass foundry; hat factories; watch making; sugar, cotton and flour mills, bottling; pottery and water works. Later industries included Bulova Watchcase Factory, EW. Bliss Torpedo Company, Agwam Aircraft Products and Grumman Aerospace. Bulova was one of the last industries in Sag Harbor with its departure in 1981. Since then, the Village relies on the tourist trade for a large part of its income.

The Village has also contributed to the history of the various wars that were fought on American soil and abroad. The 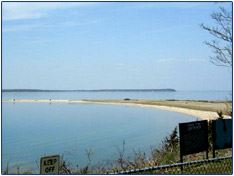 Revolutionary War saw the British set up strong garrisons and naval blockades preventing the Port of Sag Harbor from sending supplies to the American Army. Many of the residents had fled to Connecticut and those that remained suffered tremendous losses as they were robbed, plundered and forced to feed and house the soldiers of the Crown.

On May 21, 1777, Colonel Return Jonathan Meigs, under the command of General Parsons, set off to surprise the British troops in Sag Harbor by making a swift attack and destroying the supplies held by them. This was accomplished in just 25 hours without any casualties to his men. After the close of the war, the majority of those living in exile returned home to pick up the pieces of their shattered lives.

We have several active organizations which serve to preserve Sag Harbor’s history, so that those that live here and visit here will always know where Sag Harbor’s place in history belongs.